Strip out existing coverings and replace with purpose made break press roofing sheets to match the existing profile laid horizontally across the curved steel rafters. Design, supply and install a purpose made containment enclosure internally to conceal and house the M & E services and guttering.

The Paddington Span 4 project commenced in the spring of 2009 and was tasked with restoring the large fourth span of the station roof, a Grade 1 listed building, back to its former glory whilst maintaining a live station environment. Originally constructed in 1916, the roof fell into disrepair in the early 90’s and was screened off from the public by a raised protection deck. This deck was reconstructed in order to facilitate the construction works directly above the live station and the public below in a safe environment.

Works included major repairs to the barrel roof steel structure along with cladding and glazing. The platforms have been reconstructed to modern standards and finished with French Limestone paving. All the M&E systems had to be stripped out and replaced with state of the art equipment. The design had to integrate the requirements for access, cladding and glazing to achieve a lightweight weatherproof roof that also provided adequate ventilation for the diesel locomotive fumes.

The Project Team incorporated Heritage concerns by relocating the cable management from below the platform to high level casing containing all electrical services and siphonic drainage. The Project Team also maintained a detailed schedule of all the works that had a Heritage impact and developed an excellent relationship with Westminster City Council (WCC) and English Heritage staff.

Along with the inherent challenge of working on London City centre projects. The amount of steel repairs to the historic structure that were required proved more extensive than first anticipated. This presented the project team with ma major challenge and in July 2010 a new re-sequenced programme was coordinated and agreed between Morgan Sindall and Network Rail. This included the use of 2 No. tower cranes supported by mobile cranes and the erection of an on-site manufacturing workshop for the steel fabricator. The re-programming also took into consideration maximising the use of limited possession working time. 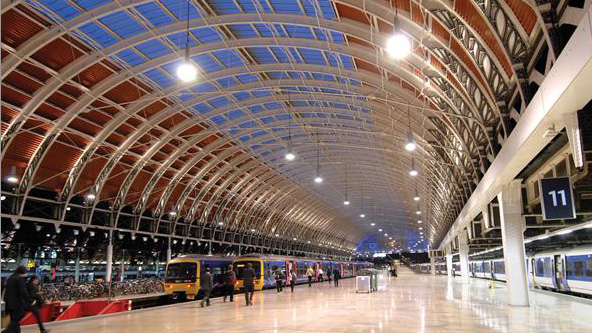